Pvt. Alfonton Ortega, member of Quartermaster Graves Registration, painting the crosses for use in an American military cemetery somewhere in France. (Picture recolored by Jecinci recolorization)

The method of using Quartermaster Graves Registration and Service troops described in this article is not claimed to be original, or practical in every type of operation. It’s presented because it was a solution to GRS problems in the invasion of France. It was submittedby Lt. Colonel M.C. Rhodes, QMC, Headquarters, V Corps.

For the invasion of France, V Corps handled the problem of the dead by using Service troops with Graves Registration personnel. The Corps Quartermaster furnished the Quartermaster of each attached division with a team consisting of the following:

These teams were each divided into three sub-teams. Two of these were regimental collecting teams consisting of:

One team per regiment
One of these collecting teams operated a Graves Registration collecting point in the rear of each of the committed combat regiments, usally close to the regimental aid station. The Service Section men were used as litter bearers under supervision of Graves Registration personnel. Almost without exception these teams were able to keep regiment areas behind battalion aid stations completely cleared of the dead.

The third sub-team, composed of the reminder of the personnel, was used to operate a division morgue and processing point. All dead were prepared for burial at this point. Preperations for burial included:

American Graves Registration personnel are lining up bodies placed in white mattress covers for burial at a temporary cemetery in Vierville, France 1944.

GRS platoon at cemetery
The dead were moved to the cemetery ready for burial by the team transportation. Where additional transportation was required in exceptional cases, a 2½-ton truck with trailer was furnished by the Division Quartermaster. The headquarters and one platoon of the Graves Registration Company, assisted by one Service Section, operated the cemetery established by the Corps Quartermaster, untill it was taken over by Army.

When the cemetery platoon was relieved by the Army Quartermaster Service, or when an extra platoon was available, the Corps area was thoroughly searched for dead. This was accomplished by the daily assignment of an area which was “policed” by a combination Graves Registration and Salvage Collecting Team.

This organization worked to keep the Corps area cleared of dead. All areas except those occupied were kept well cleared of military salvage.

This method of employing Graves Registration troops proved very efficient from a functional standpoint. The use of Service troops with Graves Registration troops was indorsed by Division Quartermasters and front-line Commanders as a definite boost to morale because combat troops were relieved of the unpleasant duty of handling their fallen comrades. 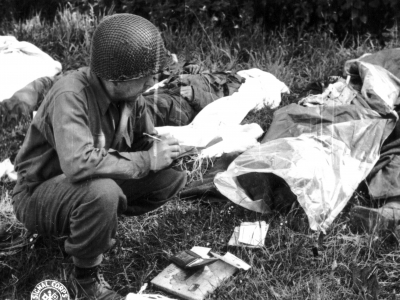