Sergeant Peter F. Slusarczyk, 603d QM Graves Registration Company, is identifying a dead soldier on Omaha Beach June 12th 1944. Later, Sgt. Slusarczyk had to identify his own brother amongst the dead in Normandy.

During the battles of Tunesia and Sicily, a chaplain served as Graves Registration Officer for the 9th Infantry Division. For his efficient handling of Allied and enemy dead, he has been awarded a Legion of Merit, and his methods have been incorporated into the Division’s Standard Operating Procedure (SOP). The following information, which gives a system of carrying out graves registration activities on the battlefield, is based on information obtained from the chaplain.

The Graves Registration Service platoon should be attached to a Division at least two weeks in advance of anticipated action in order that proper instructions, coordination, and arrangements for equipment can be made. The units are usually attached too late, a couple of days before or even a few days after the beginning of action. G-3 must keep on informing the Division Graves Registration Officer of the relative location of a new action or difficult fighting so that preparations can be made to handle the situation.

Some system of communication must be available direct to the Graves Registration Officer of the Division for reports and checkups to higher headquarters and from the field to combat. Lack of direct communications causes much delay and possible loss of location of bodies.

One central cemetery
One cemetery per Corps or similar unit established previous to operations seems more advisable than one per Division. Evacuation of all bodies to such a central location would avoid unnecessary reburials and possibility of lost identification. Establish cemeteries near Prisoner of War inclosures in order that sufficient labor may be available. There are no service troops available for digging graves. Civilian labor is often difficult to obtain or is unreliable. The GRO platoon is not large enough for either supplying guards or digging-labor.

All personnel should be instructed to make an immediate report to the Division GRO of any isolated grave discovered (American, Allied, or Enemy). Coordinates of location and any other known information should be submitted. No isolated burials (American or Allied) should be made on the battlefield unless evacuation is impossible or morale demands it. Bodies should not be exposed for more than 43 hours, or more than 25 hours if exceedingly hot weather. If battlefield burial becomes necessary, the immediate officer or non-commissioned officer shall:

In all cases except the dire emergency, bodies will be evacuated to GRS collecting points or cemetery. In the case of American or Allied dead:

The disposition of possessions not found on body proceeds according to War-Department memo W600-61-43, paragraph 3a, b, c, d, and e, except that U.S. Treasury checks for moneys of the deceased will be obtained from the local finance officer through Division GRO, and not as listed in paragraph 3c.

The check will be forwarded by Division GRO direct via air mail to Effects Quartermaster. Receipt and necessary information will be supplied unit for correct marking of Form 54. Be certain entry is not made on Form 54 until receipt has been obtained from Division GRO.

Prior to entering combat zone, each organization commander will personally check to verify that each man of his company is wearing identification tags and that leggings are marked for identification. Periodic inspection will be made at unannounced times. Hand sets for making tags in Battalions should be furnished.

During lulls in battle, search will be made for any possible dead. The lives of soldiers will not be endangered by entering known mine-fields to remove dead, until engineers have made it relatively safe.

No soldier will be reported KIA unless there is absolutely certainty. In all other cases, a soldier is MIA (Missing-in-Action). There is no such thing as guessing. Report to Division GRO all temporary burials and al unburied bodies. Civilian dead are not the responsibility of combat troops, but should be reported to proper local authorities.

Each unit down to and including a company will have an officer (executive officer) designated as GR officer, who shall be responsible for supervision of temporary burial of dead or evacuation of GRS collection point. These officers shall be directly responsible to the Division GRO. 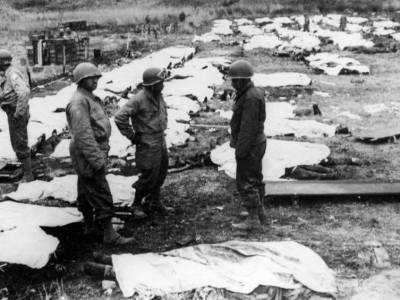 Pvt. Alfonton Ortega, member of Quartermaster Graves Registration, painting the crosses for use in an American military cemetery somewhere in France. (Picture recolored by Jecinci recolorization) The …