The cemetery for the men who died at Bastogne was opened on 4 February 1945, at Foy, the scene of some of the bitterest fighting. Actually, soldiers other than those who gave their lives at Bastogne were biried there. Foy continued to be used by the Third Army until March 1945, when it was transferred to ADSEC (The Advance Section, Communications Zone). By that time it contained 2,327 American, 26 Allied, and 3,396 enemy dead. It was turned over to the Oise Intermediate Section on 6 April 1945. The Bastogne area was “swept” until 23 June 1945. Then the cemetery was closed. In October, when AGRC was conducting a preliminary survey for the purpose of selecting permanent cemeteries, it recommended that the Foy Cemetery be abandoned because of its nearness to Henri-Chapelle, which would undoubtedly be chosen as the permanent cemetery for the area. 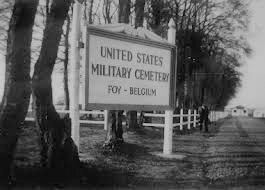