This is an archive document from the German Army reporting POW Charles M. Ricketts has died on February 1st 1945 after being in captivity for approximately 27 days at Stalag 12A to 9B near Limburg An Der Lahn, Prussia. Probably, this document was created by the German equivalent of the Graves Registration Service. It was later handed over to the Americans, resulting in a few translated areas on the document itself.

Charles was a member of the 134th Infantry Regiment, 35th Infantry Division and was assumed being taken prisoner on January 5th 1945 in Holland.

We are looking for pictures showing Charles M. Ricketts (ASN 35813049). Anyone with information, any at all, please contact us. We will pay for information. 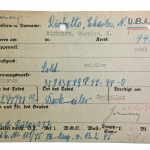 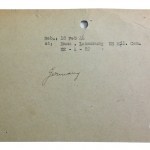 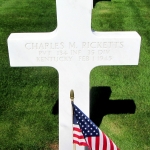