2nd Lieutenant John T. Kidney Jr was born on 2 May 1914 and was from Akron Ohio. On 3 February 1943 he enlisted in the U.S. Army.  He was assigned to the 2nd Platoon of the 603rd Quartermaster Graves Registration Company.

​”An advance detail of the 2nd Platoon left Winchester with the advance detail of the 9th QM.  Lt. Wells, S/Sgt. Kidney, Sgt. Grealis, Sgt. Krupp, T/5 Jack Paul, and Pfc. Laker, moved to Camp Hurley for briefing.  Grealis and Laker left the next morning for South Hampton.  They went right down to the docks and loaded.  The rest of the advance element loaded the next day at South Hampton.  They came over on a liberty ship operated by the “Limeys.”  Went over the side of the ship into a Higgins landing craft on a rope ladder after throwing our barracks bags into the boat.  Stopped off shore when the boat hit bottom.  Walked off into water chest high on everybody but Lt. Wells and Sgt. Krupp; it was up to their necks.  Kidney disappeared under the water in a shell hole watching them and got drenched.”

The next day, his platoon set up a cemetery at St. Mere Eglise.

This period covered the operation in the Hurtgen Forest, the Battle of the Bulge, and back to the Hurtgen Forest.  The 603 operated Collecting Points for two US Corps, many Divisions, Independent Regimental Combat Teams, and Brigades.  During this period the company was so scattered, and movement so rapid, that most of the men at the collecting points did not even know where the Company Headquarters was located. 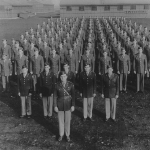